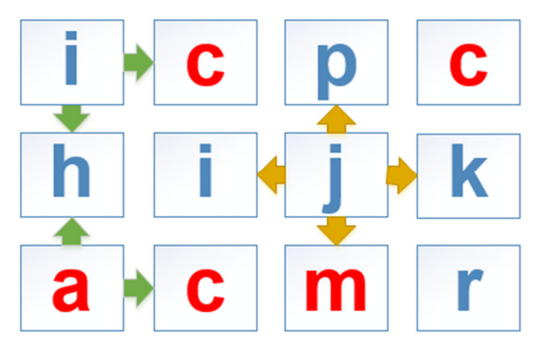 John Corner demands to generate words from his alphabet table. Each word is composed by traveling of alphabets in four directions (← le*, ↑ up, → right, and ↓ down), star/ng from first alphabet (‘i’) un/l last alphabet (‘r’). When all words have been created, he would like to know how many words he has. Of course, it is possible to have some duplicated words and he also needs to know how many unique words he got. Please help him to finish these funny tasks.

From the Figure above presented alphabet table that has the 3 row x 4 column.

Next step, take another adjacent alphabet ‘c’. ‘c’ can move in ordered left, right and down. The words will be “ci, cp, ci”. He repeats these steps until reaching the last alphabet (‘r’).

Then, continue to move for the word with length = 3

Then, all summarized words starting from the first alphabet will be “ici”, “icp”, “ici”, …. , then, repeat until reaching the last alphabet (‘r’)

John has been participated ACM ICPC Thailand and he loves it very much. Therefore, he prefers to define “acm” as THREE forbidden alphabets. Any word contains any forbidden alphabets (‘a’ OR ‘c’ OR ‘m’ LOWERCASE only) will be discarded (examples: ici, ahi, and mrk will be rejected)

Remark: When he moves an alphabet to another alphabet, it can be moved back to a previous selected alphabet if it still satisfies the policy (moving four directions, word lengths and forbidden alphabets).

Since John applies the moving steps including his traveling restriction, the generated words will be minor changed as illustrated in these 3 examples:

The following R lines represent the alphabet table. Each line is a row containing C characters without space. All given characters are smaller letters.

All words = 7 (‘a’ does not count as a forbidden alphabet) and unique words = 7 (no duplication).