Oh no! Hackers are threatening to shut down Twitface, the premier social networking site. By taking advantage of lax security protocols, nefarious cyber-bandits have developed a virus that spreads from user to user, amplifying over time and eventually bringing the network to its knees from massive congestion. Normally users have to manually send messages to one another (squawking), but these ne’er-do-wells have figured out how to circumvent that rule, and have created squawks that spawn more squawks without user intervention. In particular, any time a user gets an infected squawk, one minute later it broadcasts an infected squawk to all its neighbors in the network (for purposes of this problem we assume that each neighbor gets the squawk exactly 1 minute after the initial user is infected). If a user receives multiple squawks at any point, the next minute it broadcasts that many squawks to all of its neighbors. For example, consider the following network: 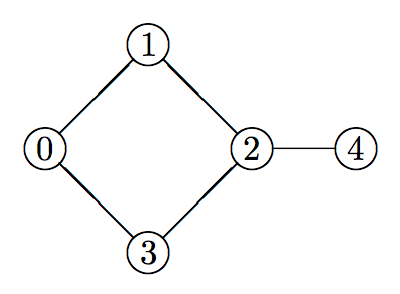 Given the layout of a social network and an initial infection site, you need to determine how many squawks are made at some given time t. In the above example the number of squawks would be 2, 4 and 10 at times 1, 2 and 3, respectively.

Output the number of squawks sent at the specified time t.