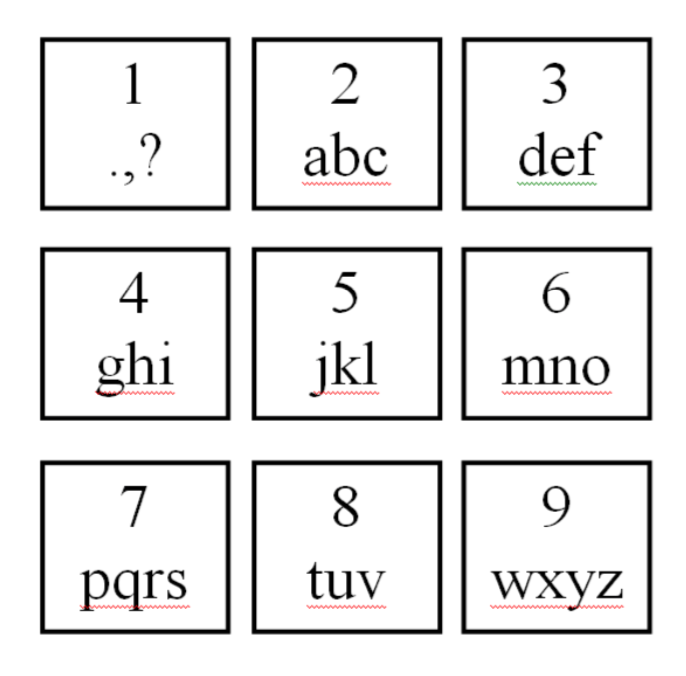 Many mobile phone users use T9 mode while typing SMS. For example, they type the messages in English in the following way. To type a word by letters, the button corresponding to that letter is pressed only once, no matter how many letters correspond to this button, and no matter which is the position of the letter on this button (see ﬁgure), and the software in the phone chooses a word corresponding to the button sequence from the dictionary. If there are several suitable words, then the most frequently occuring word will be offerred ﬁrst (initially the words with equal frequency are ordered alphabetically).

You need to write a program which, given a dictionary with initial frequencies of the words and given a sequence of button presses, will write the message that appears on the screen.

The ﬁrst line of the input ﬁle contains an integer N (3 ≤ N ≤ 50000) — the number of words in the dictionary. Each of the next N lines contains one dictionary word and an integer F (1 ≤ F ≤ 1000) — the initial value of this word frequency (larger value corresponds to larger frequency). The value of the frequency is separated by exactly one space character from the word itself. Dictionary words contain only small english letters. The words in the input ﬁle are ordered alphabetically. The word length does not exceed 20 characters, all words are non-empty and different.

Last line of the input ﬁle contains string, denoting the sequence of pressed buttons when message is typed, which consists of digits from 1 to 9, and characters “space” and ‘*’. Length of this line does not exceed 100000 characters.

Output the text of SMS.

In the second example, at ﬁrst the software will propose the word “act”, then “bat”, which will be accepted by the user. Then the frequency of the word “bat” becomes 2. Thus, when the same combination of digits is entered again, the ﬁrst proposed word is “bat”, then “act” and then “cat”. Third time the words will be proposed in the following order: “cat” (as the new word with frequency 2), “bat” (frequency 2), “act” (and its frequency becomes equal to the frequency of other words), and in the last case the words will be proposed in order “act”, “cat”, “bat”.