Eric Googlander is a fashion model who performs by walking around on a stage made of squares that form a grid with R rows and C columns. He begins at the leftmost bottom square, facing toward the top edge of the stage, and he will perform by making a series of moves. Googlander knows only the following two moves:

1. Take one step forward in the direction he is currently facing

2. Make a single 90 degree turn to the right, then take one step forward in the new direction he is facing following the turn

(Note that Googlander does not know how to make a 90 degree left turn.)

How many different paths is it possible for Googlander to walk? (Two paths are the same if and only if they visit the same squares in the same order.)

The first line of the input gives the number of test cases, T. T lines follow; each consists of two space-separated integers R and C.

For each test case, output one line containing "Case #x: y", where x is the test case number (starting from 1) and y is the number of different paths that Googlander can walk.

In Case #1, Googlander cannot make any moves. The only possible path is the trivial one consisting of the only square.

In Case #3, these are the possible paths: 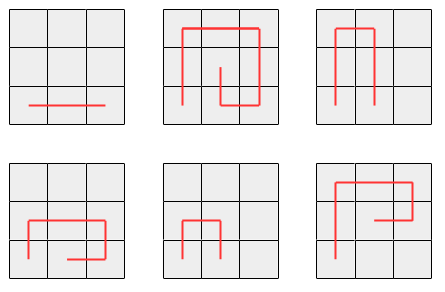