Before graduating from Awesome Programmer University, students traditionally perform certain "graduation requirements". One of these is driving around a traffic circle backwards. For most people, this is crazy enough, but as an extra challenge, you want to see if you can go backwards around the traffic circle multiple times without stopping. 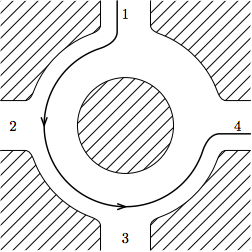 You have been watching cars enter and leave the traffic circle for X seconds. For each car, you record the time it enters the circle, as well as the intersections it enters and leaves at. All cars are moving counter-clockwise at the rate of 1 intersection per second. Each car you watched exited the circle before coming back to the intersection it entered at. There are multiple lanes on the traffic circle, so multiple cars can occupy the same position at the same time.

If you had planned it just right, how long could you have driven clockwise in the traffic circle during this time? You must enter the circle at some integer time >= 0, leave at time <= X, and once you leave, you are not allowed to come back. When in the traffic circle, you must travel clockwise at the rate of 1 intersection per second. You want to play it safe (well, as safe as driving backwards on a traffic circle can be), so you must never touch or pass by another car. In particular, you cannot leave the circle at an intersection at which another car is entering at the same moment, and you cannot enter the circle at an intersection at which another car is leaving at the same moment. You can choose when and where to enter and leave the circle.

For each test case, output one line containing "Case #x: y", where x is the case number (starting from 1) and y is the maximum number of seconds you can travel on the circle. Note that y can be zero both in the case where you cannot enter the circle at all and in the case when you can enter it, but can't travel even one intersection. 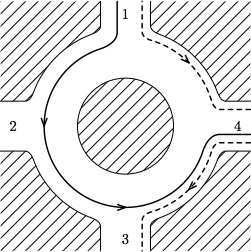 Note: Driving against the direction of the traffic on a traffic circle is typically not a wise thing to do and may cause harm to you or other people. Google (and Google Code Jam in particular) encourages you not to try this.