Where roads intersect, there are often traffic lights that tell pedestrians (people walking) when they should cross the street. A clever pedestrian may try to optimize her path through a city based on when those lights turn green. 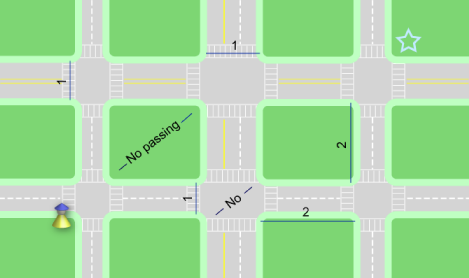 For example, intersection 0 could have the following values:

The first line in the input contains the number of test cases, C. This is followed by C test cases in the following format:

A single line containing "N M", where N and M are the number of horizontal roads (rows) and vertical roads (columns), as above. This is followed by N lines. The ith of those lines contains information about intersections on the ith row, where the 0th row is the northmost. Each of those lines will contain 3M integers, separated by spaces, in the following form:

Si,j, Wi,j and Ti,j all refer to the intersection in the ith row from the north and the jth column from the west.

For each test case, output a single line containing the text "Case #x: t", where x is the number of the test case and t is the minimum number of minutes it takes the pedestrian to get from the southwest corner to the northeast corner.