The year 2008 will be known as a year of change and transition, the start of a new era: we're talking, of course, about the new Google Code Jam format. The introduction of this contest has jammed so many great programming competitions together in a single year that people have started calling it The Year of Code Jam.
Sphinny, a passionate contestant, is looking at her calendar of the year and discovering that a great number of programming contests has been scheduled. She has marked every day of the year on the calendar in one of the three ways:

Note: To simplify the problem, we'll assume that there is no concept of qualification: you don't have to participate in one contest to be eligible for another.

Being in a world that is somewhat different from ours, Sphinny's calendar has some features we must mention: It has N months, and each month has exactly M days.

The picture below depicts a calendar with 5 months, 8 days in each month, 15 blue days, and 5 question marks. 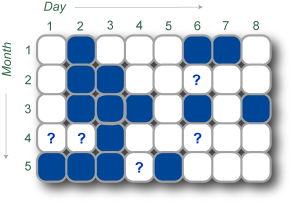 Sphinny wants to maximize her happiness from these contests, and she estimates the effect of the contests on her happiness as a summation of values for all the blue days. For each blue day, the value is computed as follows:

Sphinny wants to plan her year now, and decide for every day with a question mark whether it should be white or blue. Her goal is simply to maximize the happiness value.

The following picture shows a solution for the example above. By changing two question marks to blue days, and the other three to white days, she can achieve a happiness value of 42. 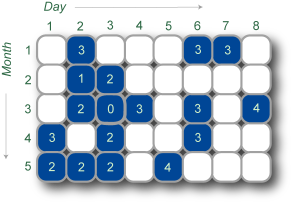 For each input case, you should output a line in the format:

where X is the 1-based case number, and Y is the maximum happiness value.

Note that the second sample is our example in the pictures above.