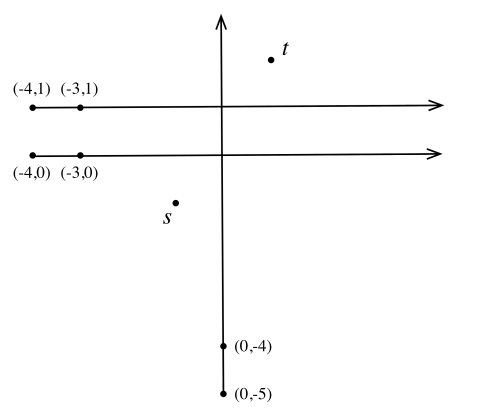 You are participating in a game with several of your classmates. Each of your opponents has a device that generates a laser beam from the location of that person in the direction that (s)he chooses all the way to the infinity. Once all of the beams are chosen and fixed, your turn starts. Your job is to run from your current location s to the destination t in a path that crosses the minimum number of the laser beams.

For simplicity, we assume that the game is played on a two-dimensional plane with your n opponents, o1, . . . , on located in n distinct points p1, p2, · · · , pn. Each opponent oi starts his/her one-way laser beam in a direction. Some beams can be in parallel. Two points s and t (different from other points) are given. You are standing in s and have to run in a path to reach t such that the running path crosses the minimum number of beams.

For each test case, output a line containing the minimum number of beams to cross.