Given the area of the N × N right triangle grid, we want to fill them in with numbers. The N × N right triangle has the legs of length N. For the purpose of the explanation, we place one side of the leg horizontally, and the other side vertically as shown in the figure below. Note that, the left most column is considered the 0 column. The right most column is the N- 1 column. And the top most row is considered the 0 row, and the bottom row is considered the N-1 row. For this problem, we want to fill the number in a circular manner. For the filling process, starting from the horizontal leg on the first row, at the opposite end of the right angle, then continue down vertically, and then move up diagonally to the left most of the second row. Then, the process continues starting from the second row, till there is no space in the triangle left to fill. The number that we must fill the will go from 0 to 9. However, we start the filling process from number 1 to 9, then restart from 0 and then continue to fill 1, 2, 3

For the case of N = 10, the resulting table is shown below. For this example, we filled in the triangle from (1) to (2) and then back toward (1) along the diagonal. 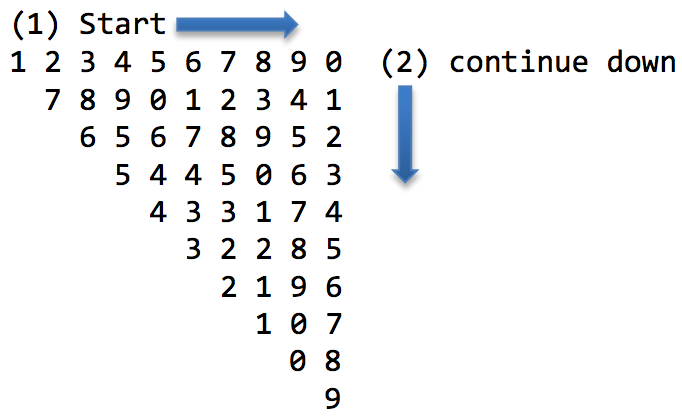 For the next Q lines, each line contains two numbers, R and C (separated by a single space), where R is the interested row and C is the interested column. (0 ≤ R ≤ C < N) Note that row and column is count from index 0.

For each interested position R and C, print out the filled in number in a single line, as shown in the output.