The documents have lines, each of which consists of a pair of names, presumably of ancient royal family members. An example of a document with two lines follows.

Lines should have been complete sentences, but the documents are heavily damaged and therefore you can read only two names per line. At first, you thought that all of those lines described the true ancestor relations, but you found that would lead to contradiction. Later, you found that some documents should be interpreted negatively in order to understand the ancestor relations without contradiction. Formally, a document should be interpreted either as a positive document or as a negative document.

We are sure that every person mentioned in the documents had a unique single name, i.e., no two persons have the same name and one person is never mentioned with different names.

where persons C and G do not appear, and the ancestor-descendant pairs such as “A E”, “D F”, and “C I” do not appear. 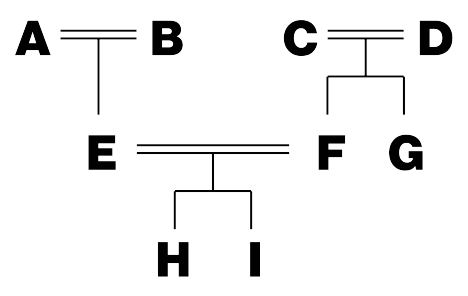 The input consists of a single test case of the following format.

The description of the i-th document ci is formatted as follows:

The first line consists of a single integer mi that indicates the number of pairs of names in the document. Each of the following mi lines consists of a pair of distinct names xi,j and yi,j (1 ≤ j ≤ mi), separated by a space.

Each name consists of lowercase or uppercase letters and its length is between 1 and 5, inclusive.

Output “Yes” (without quotes) in a single line if there exists an interpretation of the documents that does not contradict with the hypothesis that p is an ancestor of q. Output “No”, otherwise.