Also Deidra has a homemade printing press. She decided to print her addition without a plus or a horizontal line, using the following standard font: 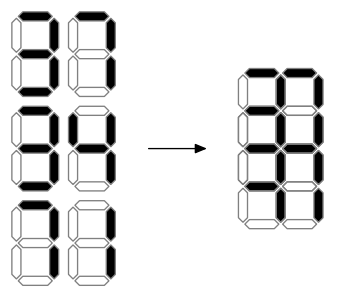 Given the resulting picture, find a correct addition that could produce it or detect that there is none.

The following 9 lines contain the description of the picture printed with the bad spacing. Each line contains w or w + 1 digits. ‘1’ denotes a black segment, ‘0’ denotes a white one. Even lines start with a space. See the examples for clarification.

If there is no valid addition, output “NO”.

Otherwise output a valid addition that produces the given figure. The output should consist of three lines, each containing w digits.

If there are several solutions, output any of them.