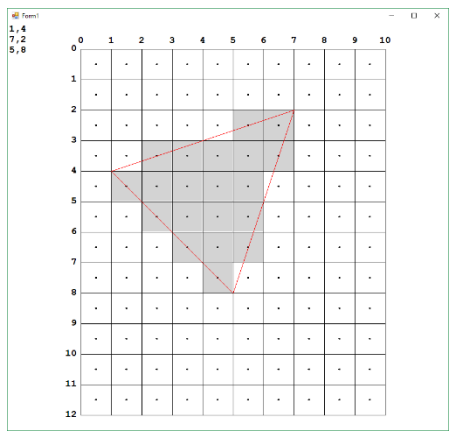 The rasterization technique chosen is to colour a pixel if and only if its centre is inside the triangle, or on an edge of the triangle. With integer coordinates for the corners it is possible (and required) to decide whether a pixel centre lies exactly on the line or not.

Your task is, given the coordinates of the corners of a triangle, calculate the number of pixels coloured following the technique described. In the example shown 20 pixels are coloured.

Input will consist of a sequence of problems. There will be one line for each problem. A problem line will hold a space separated series of integers: x1, y1, x2, y2, x3, y3. All x and y coordinates will be in the range 0 to 2000 inclusive. You may assume that the screen size is 2000 by 2000. End of input will be denoted by a line with six zeroes (which should not be processed).

Output will be a single line per problem, with the number of coloured pixels.