Taro, a junior high school student, is working on his homework. Today’s homework is to read Chinese classic texts.

As you know, Japanese language shares the (mostly) same Chinese characters but the order of words is a bit different. Therefore the notation called “returning marks” was invented in order to read Chinese classic texts in the order similar to Japanese language.

There are two major types of returning marks: ‘Re’ mark and jump marks. Also there are a couple of jump marks such as one-two-three marks, top-middle-bottom marks. The marks are attached to letters to describe the reading order of each letter in the Chinese classic text. Figure 1 is an example of a Chinese classic text annotated with returning marks, which are the small letters at the bottom-left of the big Chinese letters. 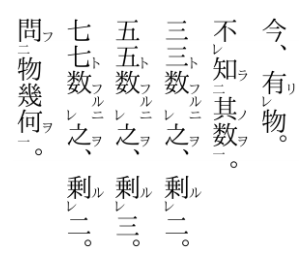 When two (or more) rules are applicable in each step, the latter in the list below is applied first, then the former.

Let’s see the first case of the sample input. We begin reading with the first letter because of the rule 1. However, since the first letter has a jump mark ‘onetwo2’, we must follow the rule 2 and skip the letter. Therefore the second letter, which has no returning mark, will be read first.

Although we have two letters which have the same jump mark ‘onetwo2’, we must not take into account the first letter, which has already been read, and must read the fourth letter. Now we have read all six letters and no letter can be read next, so we finish reading. We have read the second, third, first, fifth, sixth, and fourth letter in this order, so the output is 2 3 1 5 6 4.

The input contains multiple datasets. Each dataset is given in the following format:

A ‘Re’ mark is represented by a single letter, namely, ‘v’ (quotes for clarity). The description of a jump mark is the simple concatenation of its type, specified by one or more lowercase letter, and a positive integer. Note that each letter has at most one jump mark and at most one ’Re’ mark. When the same letter has both types of returning marks, the description of the jump mark comes first, followed by ‘v’ for the ‘Re’ mark. You can assume this happens only on the jump marks with the number 1.

If the i-th letter has no returning mark, marki is ‘-’ (quotes for clarity). The length of marki never exceeds 20.

You may assume that input is well-formed, that is, there is exactly one reading order that follows the rules above. And in the ordering, every letter is read exactly once.

You may also assume that the N-th letter does not have ‘Re’ mark.

The input ends when N = 0. Your program must not output anything for this case.