Each colony can be modeled as a polycube, that is, one or more cubes of the same size all joined by their faces. Note that, as forming a polycube, all cubes of each colony are connected. This implies every cube has at least one face coincident with a face of another cube, except for colonies with a single cube. The figure below illustrates a couple of example colonies. 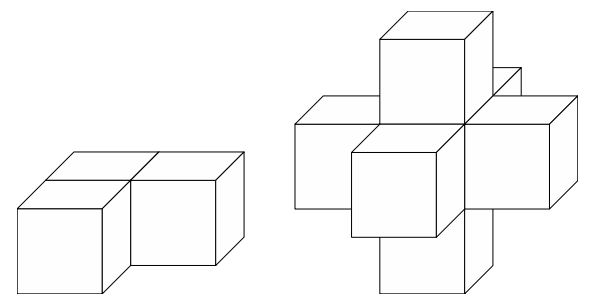 For the purpose of this problem, we consider an xyz-space (i.e. a three-dimensional space with the Cartesian coordinate system) where all cubes are placed in such a way that each edge is parallel to x-axis, y-axis, or z-axis. Also, the edge length of the cubes is scaled to 100.

The input is a sequence of datasets, each of which has the following format:

n is the number of cubes of a colony (1 ≤ n ≤ 16). (xi , yi , zi) represents the coordinates of the center of the i-th cube, where each coordinate value is guaranteed to be a multiple of 100 (i.e. the edge length of the cubes). (sx , sy, sz ) and (dx , dy, dz ) represent the robot’s present point and the next repair point respectively. You may assume that these two points are always different and that neither of them lies on any edge. All coordinate values are integers between −2000 and 2000 inclusive.

The input is terminated by a line with a single zero, which is not part of any datasets and hence should not be processed.

For each dataset, print the distance of the shortest route from the present point to the next repair point. The distance may be printed with any number of digits after the decimal point, provided the absolute error does not exceed 10−8 .

The figure below shows how the robot will move in the sixth case:

Figure 4: The robot’s move in the 6th case