Geohash is a procedure of coding map coordinates to scalar values for the purpose of efficient storage and querying of geographical data in databases. In this problem, a map is a 2n × 2n rectangular grid embedded in a standard coordinate system with the x coordinate growing rightwards and the y coordinate growing upwards. A map cell is a unit square aligned with the coordinate axes whose lower-left corner is a point with integer coordinates (x, y) such that 0 ≤ x, y < 2n .

There are a total of 22n cells in a 2n × 2n map. Given a map cell c, its geohash h(c) is a 2n-bit nonnegative integer constructed bit by bit starting from the most significant bit by setting the viewport to the entire map and repeating the following two steps n times:

You are given a map region C described as a set of cells in the interior of a polygon whose sides are aligned with the grid. You are also given q target integers t1, t2, . . . , tq. For each tk find the area of an optimal tk -approximation of C.

The first line contains an integer n (1 ≤ n ≤ 30) — the binary logarithm of the map dimensions.

The following line contains an even integer m (4 ≤ m ≤ 200) — the number of vertices of the polygon. The k-th of the following m lines contains two integers xk and yk (0 ≤ xk , yk ≤ 2n ) — the coordinates of one vertex of the polygon. The vertices are given in the counterclockwise order. Each polygon side is either vertical or horizontal. You may assume that the polygon does not intersect or touch itself, or contains consecutive parallel sides.

The k-th line should contain the size of the optimal tk -approximation of the given region. 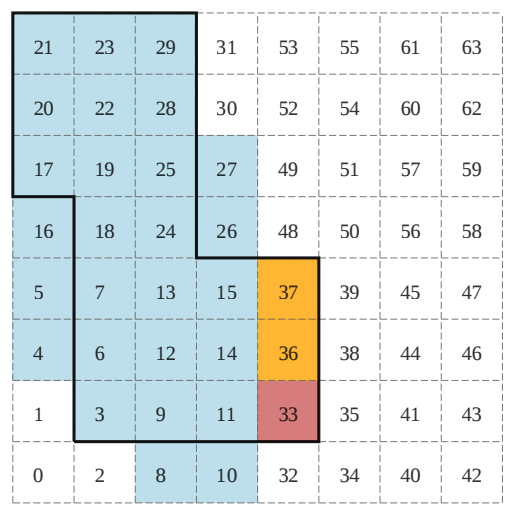