Gennady and Georgiy are playing interesting game on a directed graph. The graph has n vertices and m arcs, loops are allowed. Gennady and Georgiy have a token placed in one of the graph vertices. Players take turns moving the token along one of the arcs that starts in the vertex the token is currently in. When there is no such arc, then this player loses the game.

For each initial position of the token and the player who is moving first, your task is to determine what kind of result the game is going to have. Does it seem to be easy? Not so much.

On one side, Gennady is having a lot of fun playing this game, so he wants to play as long as possible. He even prefers a strategy that leads to infinite game to a strategy that makes him a winner. But if he cannot make the game infinite, then he obviously prefers winning to losing.

On the other side, Georgiy has a lot of other work, so he does not want to play the game infinitely. Georgiy wants to win the game, but if he cannot win, then he prefers losing game to making it infinite. 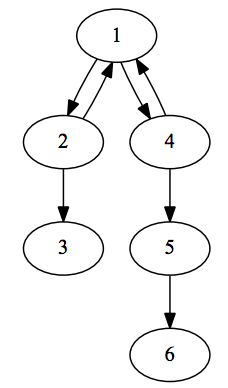