You are a manager of a prestigious soccer team in the JOI league.

After the practice finishes, players must clear the ball. In the beginning of the clearance, the player i (1 ≦ i ≦ N) stands at (Si , Ti). There is only one ball in the field, and the player 1 has it. You stand at (SN, TN) with the player N. The clearance is finished if the ball is passed to (SN, TN), and you catch it. You cannot move during the clearance process.

You can ask players to act. But, if a player acts, his fatigue degree will be increased according to the action. Here is a list of possible actions of the players. If a player has the ball, he can act (i),(ii), or (iii). Otherwise, he can act (ii) or (iv).

(i) Choose one of the 4 directions (east/west/south/north), and choose a positive integer p. Kick the ball to that direction. Then, the ball moves exactly p meters. The kicker does not move by this action, and he loses the ball. His fatigue degree is increased by A × p + B.

(ii) Choose one of the 4 directions (east/west/south/north), and move 1 meter to that direction. If he has the ball, he moves with it. His fatigue degree is increased by C regardless of whether he has the ball or not.

(iii) Place the ball where he stands. He loses the ball. His fatigue degree does not change.

(iv) Take the ball. His fatigue degree does not change. A player can take this action only if he stands at the same place as the ball, and nobody has the ball.

Note that it is possible for a player or a ball to leave the field. More than one players can stand at the same place.

Given the size of the field and the positions of the players, write a program which calculates the minimum possible value of the sum of fatigue degrees of the players for the clearance process.

Read the following data from the standard input.

Write one line to the standard output. The output contains the minimum possible value of the sum of fatigue degrees of the players for the clearance process.

In this sample input, the initial status of the field is as in the following figure. The white circles are the players. The black circle is the ball. You stand at (6, 5). 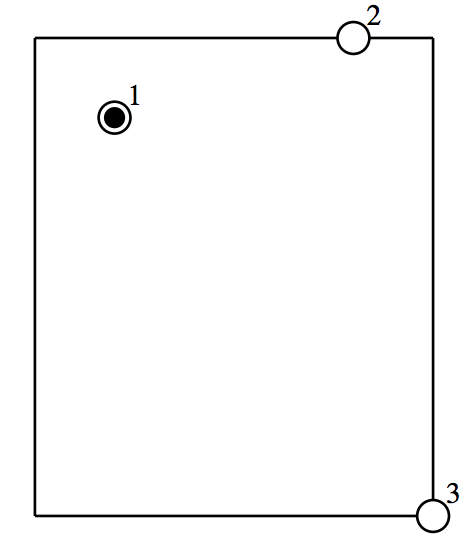 The initial status of the field

The players act as follows:

The actions in an optimal solution

Sample Input 2 satisfies the constraints of Subtask 1 and Subtask 2. In Sample Input 2, it not not necessary to kick the ball.

Sample Input 3 satisfies the constraints of Subtask 1 and Subtask 2.