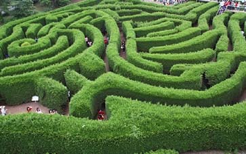 Fortunately, the structures of all Philosopher’s Walks are similar; the structure of a Philosopher’s Walk is designed and constructed according to the same rule in a 2k meter square. The rule for designing the pathway is to take a right-turn in 90 degrees after every 1-meter step when k is 1, and the bigger one for which the integer k is greater than 1 is built up using four sub-pathways with k - 1 in a fractal style. Figure F.1 shows three Philosopher’s Walks for which k is 1, 2, and 3. The Philosopher’s Walk W2 consists of four W1 structures with the lower-left and the lower-right ones are 90 degree rotated clockwise and counter-clockwise, respectively; the upper ones have the same structure with W1. The same is true for any Wk for which the integer k is greater than 1. This rule has been devised by a mathematical philosopher David Hilbert (1862 – 1943), and the resulting pathway is usually called a HILBERT CURVE named after him. He once talked about a space filling method using this kind of curve to fill up a square with 2k sides, and every Philosophers’ Walk is designed according to this method.

For example, if the number of meter-steps taken by a lost philosopher in the Philosopher’s Walk in W2 in Figure F.1(b) is 10, your program should report (3,4).

Your mission is to write a program to help Tae-Cheon by making a program reporting the location of the lost philosopher given the number of meter-steps he has taken and the length of a side of the square of the Philosopher’s Walk. Hurry! A philosopher urgently needs your help.

Your program is to read from standard input. The input consists of a single line containing two positive integers, n and m, representing the length of a side of the square of the Philosopher’s Walk and the number of meter-steps taken by the lost philosopher, respectively, where n = 2k and m ≤ 22k for an integer k satisfying 0 < k ≤ 15.

Your program is to write to standard output. The single output line should contain two integers, x and y, separated by a space, where (x,y) is the location of the lost philosopher in the given Philosopher’s Walk.