In this problem we have a binary tree representing a circuit composed only by two-input NAND gates. In the tree, each internal node represents a NAND gate, which uses as inputs the values produced by its two children. Each leaf in the tree represents an external input to the circuit, and is a value in {0, 1}. The value produced by the circuit is the value produced by the gate at the root of the tree. The following picture shows a circuit with nine nodes, of which four are NAND gates and five are external inputs. 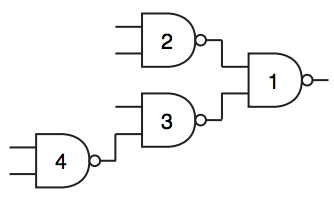 Each gate in the circuit may be stuck, meaning that it either only produce 0 or only produce 1, regardless of the gate’s inputs. A test pattern is an assignment of values to the external inputs so that the value produced by the circuit is incorrect, due to the stuck gates.

Given the description of a circuit, you must write a program to determine the number of different test patterns for that circuit.

Output a single line with an integer indicating the number of different test patterns for the given circuit. Because this number can be very large, output the remainder of dividing it by 109 + 7.