Sometimes the dominoes are not positioned well and not all of them will topple. Given the layout of the dominoes, can you work out how many will topple when a particular domino is pushed?

The dominoes are placed on a board at integer coordinates. They have four possible orientations, as shown in the following diagrams (viewed from above):

The black lines are the tops of the dominoes, and the crosses show where they would fall if pushed. The dimensions of the dominoes are such that when they topple they will only push the domino at the marked location (if there is one there).

If a domino hits a second domino that is at an angle of 90 degrees to the first, the second domino will not be toppled (but the first is still counted as toppled).

The positions on the board will be described using x and y coordinates, with the x-axis going from left to right and the y-axis going from top to bottom in the diagrams.

End of input will be denoted by four zeroes and should not be processed.

For each problem, output a single integer with the maximum number of dominoes that can be toppled by pushing the first domino in the input. 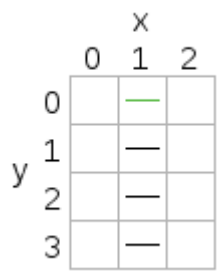 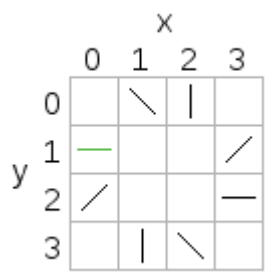 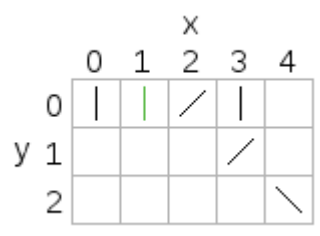