Daryl owns a disco dance club named the Disco Dance Den. It has a disco dance floor which is in the shape of an m × n grid. At first, all of these cells are lit up. When the music starts playing, some cells of this grid become unlit.

A disco dancer only steps on lit cells while doing a disco dance. At the exact moment he steps on a lit cell, it immediately becomes unlit. Moreover, a disco dancer always satisfies the following four conditions:

Now, we say that Daryl’s Disco Dance Den is dark if all the cells of the disco dance floor becomes unlit.

Daryl discusses a disco dare with a group of disco dancers in his den. The disco dare goes as follows:

As an example, if this is the setup: 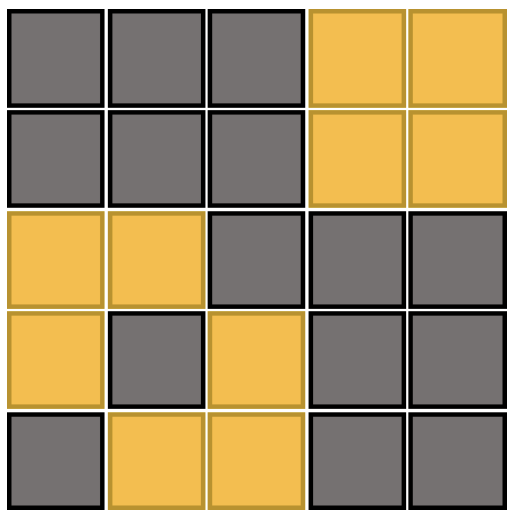 Then the disco dare can be done by having two disco dancers start at the cells indicated in the left side of the figure below:

After all the disco dancers finish their disco dance, Daryl’s Disco Dance Den is expected to go dark since all the lit cells have been stepped on. In addition, the two disco dancers on the dance floor satisfied all four conditions a disco dancer must satisfy.

The first line of input contains a single integer T, the number of test cases. The following lines describe the test cases.

The first line of each test case contains three space-separated integers m, n and k, in that order, specifying the number of rows and columns of the grid, respectively, and the number of groups of cells which will become unlit once the music starts.

Note: The groups of unlit cells may overlap.

For each test case, one line containing a single integer N, which is the smallest number of cells whose states must change so that the disco dancers can complete Daryl’s disco dare.

The first sample input shows that the groups of unlit cells may overlap. The solution is to flip just one cell, namely (4,2), so it becomes just like the grid shown in the images above.