There is a mysterious planet called Yaen, whose space is 2-dimensional. There are many beautiful stones on the planet, and the Yaen people love to collect them. They bring the stones back home and make nice mobile arts of them to decorate their 2-dimensional living rooms.

In their 2-dimensional world, a mobile is defined recursively as follows:

For example, if you got three stones with weights 1, 1, and 2, here are some possible mobiles and their widths:

Given the weights of stones and the width of the room, your task is to design the widest possible mobile satisfying both of the following conditions.

You should ignore the widths of stones. 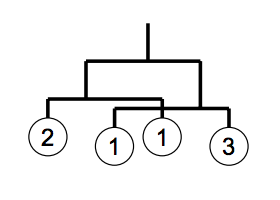 In some cases two sub-mobiles hung from both ends of a rod might overlap (see the figure on the right). Such mobiles are acceptable. The width of the example is (1/3) + 1 + (1/4).

In case there is no mobile which satisfies the requirement, answer −1 instead.

The answer should not have an error greater than 0.00000001. You may output any number of digits after the decimal point, provided that the above accuracy condition is satisfied