A series / parallel resistor circuit is shown below. 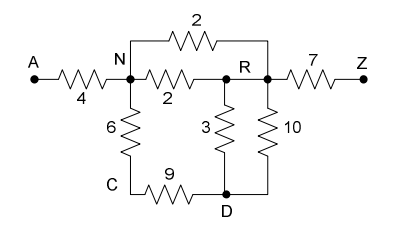 Within the circuit, a resistor can be specified by a triple consisting of the connection points at either endpoint, and the resistance. Resistor 9 could be specified as either (C, D, 9) or (D, C, 9). A circuit specification is the set of all resistor specifications.

1A Wheatstone Bridge circuit, shown on the right, is not a well-formed series-parallel circuit.

There will be multiple circuit specifications. The first input line for each circuit specification is an integer N (N <= 1000), being the number of resistors in the circuit. This is followed by N lines, each being a resistor specification in the form: X Y r, where X and Y are uppercase characters, and r is a positive integer resistance (r < 100). The equivalent resistance is guaranteed never to be greater than 100. A line with a single 0 terminates the input.