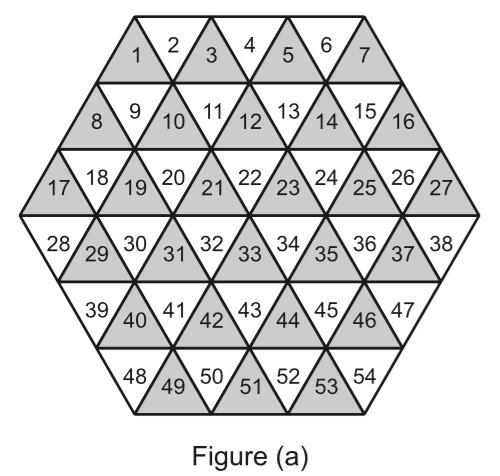 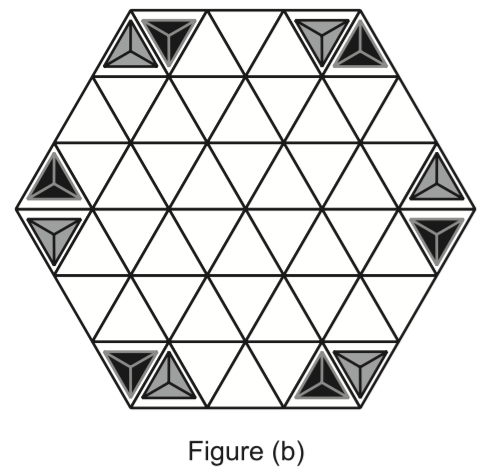 Sahara is a two player board game played on a hexagon-shaped grid made out of 54 triangles as the one shown in Figure (a). Each player has 6 (tetraeder) pyramids, initially placed as seen Figure (b). Player one has the dark pyramids, player two has the lighter ones. The players take turns in moving one of their own pyramids. A pyramid is moved by tipping the pyramid on its side into an adjacent space. For example, a pyramid at location 11 can be moved to location 3, 10, or 12 (assuming the destination location is free.)

Write a program that determines if the first player can trap an opponent’s pyramid in a single move.

Your program will be tested on one or more test cases. Each test case is specified on a single line. Each test case is made of 12 numbers in the range [1,54]. The first six numbers specify the locations of the first player’s pyramids. The last six are for the second player. The locations are numbered in the same way as in Figure (a). Numbers are separated using one or more spaces. All test cases specify a valid game position where no pyramid is already trapped.

The last line of the input file will have a single zero.

For each test case, output the result on a single line using the following format:

Where k is the test case number (starting at 1,) and result is "TRAPPED" if the first player can trap a pyramid of the opponent by moving one of his pyramids. Otherwise, result is "FREE".

The first test case corresponds to figure (c) while the second to figure (d).