In a study of domestic power consumption, researchers built a simulator for New Zealand homes. For each home the software simulates the power consumption of appliances. The goal of the project was to identify microspikes in power usage – short periods of time during which total power consumption rose above a specified limit.

Your task is to write a program to read files of appliance records, and count the number of microspikes that occur. For any given simulation you will be given a power threshold M and a time threshold S. A microspike occurs if the power level P satisfies P > M for a period of time T: 1 <= T <= S.

You can assume that the power level of an appliance never goes negative, and that total power consumption never exceeds 1,000,000,000. A microspike is only counted if both increase from below to above the threshold and reduction to below or at the threshold are reported (At the end of simulation appliances may not have been turned off).

For each simulation one line of output is required, with the number of microspikes observed. 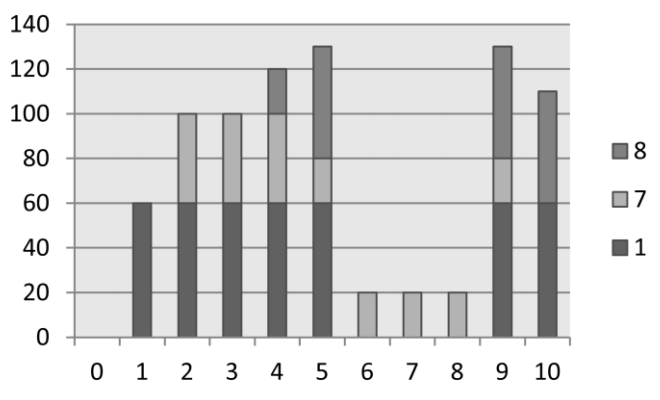 Total power consumption for sample input. Labels on the horizontal axis are the times for the starts of the seconds represented by the bar. All power changes occur instantaneously at the start of a second. Note that the column at time 10 is not part of the simulation. It is included in the chart to show the power level that continues indefinitely after the simulation end.