While doing a routine exploration of the Universe, the Balkan Space Agency (BSA) guys have found traces of extraterrestrial (ET) intelligence.

More exactly, they have found a collection of rectangular metal plates containing messages written in the ET’s language. Each plate contains a 2D array with n rows and m columns, each element of the array being a printable ASCII character with the corresponding numeric code in the range 32 … 127. Also, each plate contains two more integers, which we will name a and b.

After studying the plates, the specialists of BSA have concluded that the ET's messages can be decrypted by using a cipher, e.g. a key which unveils the way to understand the message, which is hidden right into the rectangular array of that same plate.

You are asked to write a program that, given the rectangular array which represents the ET’s message and the integers a and b which are written on the plate, finds the cipher and the positions on the plate where it can be found.

The array and the 4 instances of the cipher on it are shown below: 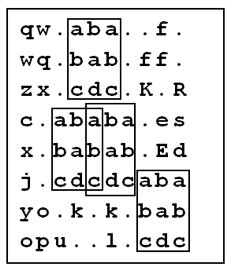