Gold transports are risky nowadays in Bancopia due to the numerous robberies. Some roads are more dangerous than others. In order to minimize the probability of a robbery on a gold transport between two given cities, the Bancopians want to place police posts on some of their roads, which will make those roads safer.

Finally, the maximum number of police posts is given. On every road at most one police post can be placed. A Bancopian police post exactly halves the robbery probability of that road. The question is how large the probability is of a robbery on a gold transport that takes the safest route between the two given cities when the police posts are placed in such a way that this probability is minimized.

No two roads in the input will connect the same pair of cities. A road is always considered bidirectional and the robbery probability does not depend on the direction the road is travelled. Finally, it is guaranteed that there is a route from city a to city b with the roads in the input.

For every test case in the input file, the output should contain a single number, on a single line: the probability that a gold transport that travels along the safest route from a to b is robbed, when at most m police posts are placed in such way that this probability is minimized, rounded to four decimals after the decimal point. The rounding should be done as usual: 0.12345 . . . is rounded to 0.1235, 0.12344 . . . to 0.1234. 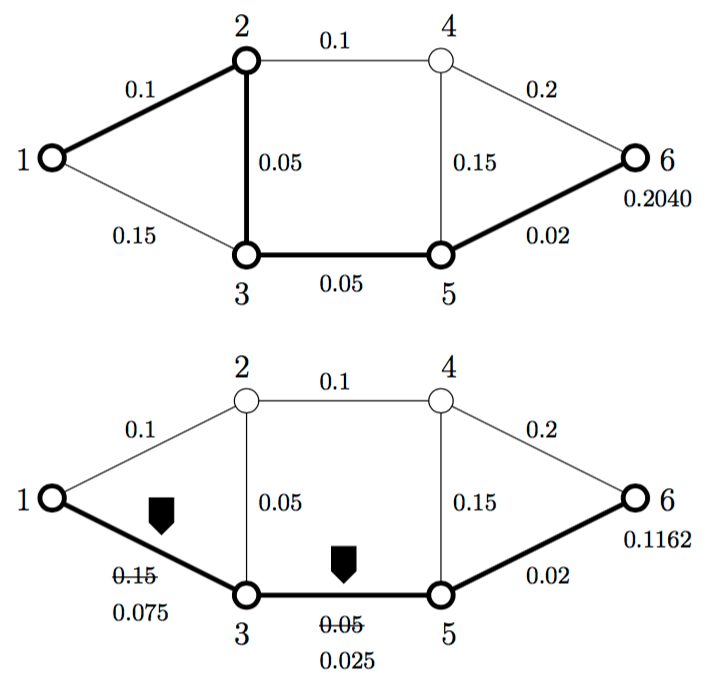