The Mountain Amusement Park has opened a brand-new simulated roller coaster. The simulated track consists of n rails attached end-to-end with the beginning of the first rail fixed at elevation 0. Byteman, the operator, can reconfigure the track at will by adjusting the elevation change over a number of consecutive rails. The elevation change over other rails is not affected. Each time rails are adjusted, the following track is raised or lowered as necessary to connect the track while maintaining the start at elevation 0. The figure on the next page illustrates two example track reconfigurations.

Given the record for all the day’s rides and track configuration changes, compute for each ride the number of rails traversed by the car before it stops.

Initially the rails are horizontal; that is, di = 0 for all i. Rides and reconfigurations are interleaved throughout the day. Each reconfiguration is specified by three numbers: a, b and D. The segment to be adjusted consists of rails a through b (inclusive). The elevation change over each rail in the segment is set to D. That is, di = D for all a ≤ i ≤ b.

Each ride is specified by one number h — the maximum height that the car can reach.

Write a program that:

The first line of input contains one positive integer n — the number of rails, 1 ≤ n ≤ 1 000 000 000. The following lines contain reconfigurations interleaved with rides, followed by an end marker. Each line contains one of:

The i-th line of output should consist of one integer — the number of rails traversed by the car during the i-th ride. 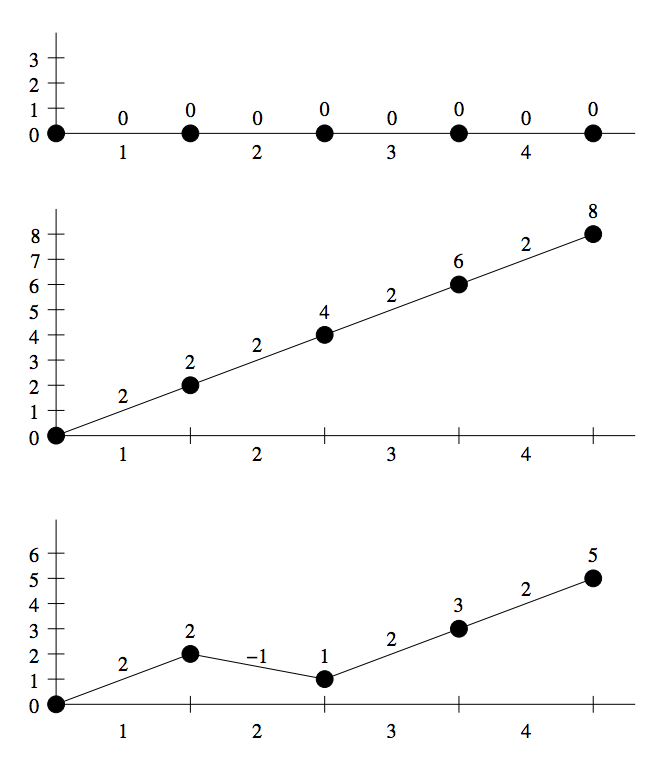