The beautiful land of Utopia was once ravaged by war. When the hostilities subsided the country was divided into four regions by a longitude (north-south line) and a latitude (east-west line). The intersection of these lines became known as the point (0,0). All four parts claimed the name Utopia, but as time went by they generally became known as Utopia 1 (northeast), 2 (northwest), 3 (southwest) and 4 (southeast). A point in any of the regions was identified by its distance east and its distance north of (0,0). These distances could be negative; hence a point in Utopia 2 was designated by a (negative, positive) pair, in Utopia 3 by a (negative, negative) pair, in Utopia 4 by (positive, negative) and in Utopia 1 by a pair of positive numbers. 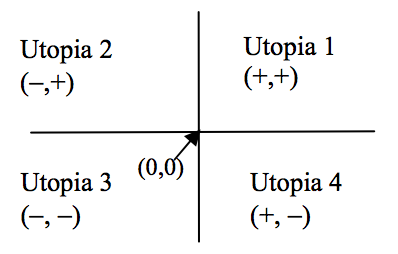 A major problem was that citizens were not permitted to cross borders. Fortunately, some ingenious IOI contestants from Utopia developed a safe means of teleportation. The machine requires code numbers, each of which can only be used once. Now the challenge facing the team, and you, is to guide the teleporter from its initial position of (0,0) to the regions of Utopia in the order requested. You don’t care where in a region you land, but you will have a sequence of N region numbers that specify the regions in which the teleporter is to land. You may be asked to land in the same region in two or more consecutive stops. After leaving the initial (0,0) point, you must never land on a border.

You will receive as input a sequence of 2N code numbers and are to write them as a sequence of N code pairs, placing a plus or a minus sign before each number. If you are currently at the point (x,y) and use the code pair (+u,−v), you will be teleported to the point (x+u, y−v). You have the 2N numbers, and you can use them in any order you like, each with a plus or a minus sign.

Your program is to write to standard output. The output consists of N lines, each containing a pair of code numbers each preceded by a sign character. These are codes pairs that will direct the teleporter to the given region sequence. Note that there must be no blank following a sign, but there must be a single space after the first code number.