Colonel Trapp is trapped! For several days he has been fighting General Position on a plateau and his mobile command unit is now stuck at (0, 0), on the edge of a cliff. But the winds are changing! The Colonel has a secret weapon up his sleeve: the “epsilon net.” Your job, as the Colonel’s chief optimization officer, is to determine the maximum advantage that a net can yield.

The epsilon net is a device that looks like a parachute, which you can launch to cover any convex shape. (A shape is convex when, for every pair p, q of points it contains, it also contains the entire line segment pq.) The net shape must include the launch point (0, 0).

You can assume that

The first line contains P and then T, separated by spaces. Subsequently there are P lines of the form xy giving the enemy units’ co-ordinates, and then T lines giving the friendly units’ coordinates.

Output a single line with the maximum possible advantage. 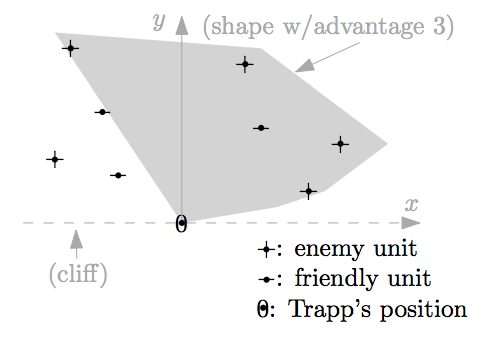