Happyland can be described by a set of N towns (numbered 1 to N) initially connected by M bidirectional roads (numbered 1 to M). Town 1 is the central town. It is guaranteed that one can travel from town 1 to any other town through these roads. The roads are toll roads. A user of the road i has to pay a toll fee of ci cents to the owner of the road. It is known that all of these ci’s are distinct. Recently, K additional new roads are completed and they are owned by a billionaire Mr Greedy. Mr Greedy can decide the toll fees (not necessarily distinct) of the new roads, and he has to announce the toll fees tomorrow.

Two weeks later, there will be a massive carnival in Happyland! Large number of participants will travel to the central town and parade along the roads. A total of pj participants will leave from town j and travel toward the central town. They will only travel on a set of selected roads, and the selected roads will be announced a day before the event. By an old tradition, the roads are to be selected by the richest person in Happyland, who is Mr Greedy. Constrained by the same tradition, Mr Greedy must select a set of roads that minimizes the sum of toll fees in the selected set and yet at the same time allow anyone to travel from town j to town 1 (hence, the selected roads form a “minimum spanning tree” where the toll fees are the weights of the corresponding edges). If there are multiple such sets of roads, Mr Greedy can select any set as long as the sum is minimum.

Mr Greedy has a sneaky plan. He plans to maximize his revenue during the carnival by manipulating the toll fees and the roads selection. He wants to assign the toll fees to the new roads (which are to be announced tomorrow), and select the roads for the carnival (which are to be announced a day before the carnival), in such a way that maximizes his revenue from the K new roads. Note that Mr Greedy still has to follow the tradition of selecting a set of roads that minimizes the sum of toll fees.

You are a reporter and want to expose his plan. To do so, you have to first write a program to determine how much revenue Mr Greedy can make with his sneaky plan.

Your program must write to the standard output a single integer, which is the maximum total revenue obtainable. 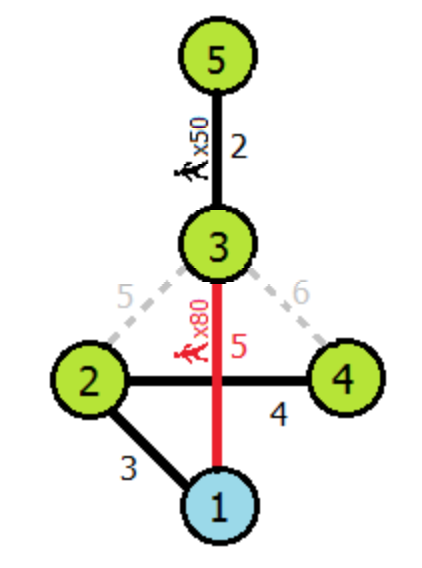