In “The Lord of the Rings II,” when Prodo and the rest of the Fellowship of the Ring defeated the wizard of darkness, Saruman, he barely escaped death. Saruman gathered soldiers to attack the human countries again. Middle Earth was divided into two camps, a Saruman camp and a human camp. All the countries in the human camp made an alliance to protect their countries from Saruman. They agreed to help each other as follows:

Saruman was pleased to hear the news from a spy crow. He thought that he could ruin the human camp, because he needed not to fight with all the human countries simultaneously.

The lands of the human countries form a rectangle, and the rectangle is partitioned into several grids. The following figure shows an example for the human land. The land consists of 4×5 grids, and there are A~D human countries. Each human country is one area which consists of consecutive grids. The countries A and C in the figure are adjacent each other as they share one or more grid boundaries, but B and C aren't adjacent each other. Note that, Saruman can attack directly the country which is in the middle of the land such as country C. 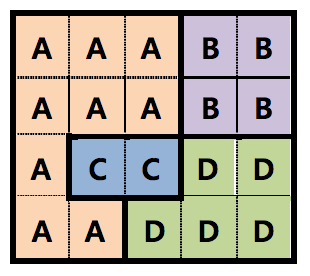 Saruman attacks only one country at once and uses all of his soldiers. In a war, the country that has more soldiers wins. If numbers of their soldiers are the same, the human country wins. All soldiers of a defeated country (including support forces) die, and any of a winner doesn't.

Given the lands of the human countries and the numbers of soldiers of each human country and Saruman, determine which camp wins and dominates Middle Earth.

Your program is to write to standard output. Print exactly one line for each test case. Each line should contain the winner, Human or Saruman.