There were n cities in an ancient kingdom. In the beginning of the kingdom, all cities were isolated. Kings ordered their subjects to construct roads connecting cities. A lot of roads were built with time. Every road was always constructed along the line segment between two cities. All cities are partitioned into disjoint components of cities by road-connectivity. A connected component of cities was called a state. A state consists of cities and roads connecting them.

A historical record tells a time sequence of road constructions in order. A road connecting two cities A and B doesn’t intersect with other roads at a point except for A and B. Before construction, A and B may have belonged to the same state or different states. After construction, A and B would belong to a same state, i.e., two states would merge into a state if needed.

Prof. Kim, a historian, is concerned about the following question: How many states does a horizontal line (corresponding to the latitude of a specific place) pass by at a moment of the past? The figure below shows an example of a configuration of roads at some moment. A circle represents a city and a line segment represents a road between two cities. There are 3 states. A line with y = 4.5 passes by two states with total 8 cities and a line with y = 6.5 passes by one state with 5 cities. 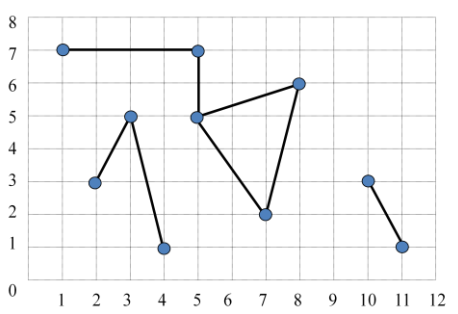 You are to write a program which handles the following two types of commands:

Your program is to read from standard input. The input consists of T test cases. The number of test cases T is given in the first line of the input. The first line of each test case contains an integer n, the number of cities, where 1 ≤ n ≤ 100,000. Each of the following n lines contains two integers x and y (0 ≤ x, y ≤ 1,000,000), where (x, y) represents the coordinate of a city. There is a single space between the integers. The cities are numbered from 0 to n-1 in order. The next line contains an integer m, the number of commands, where 1 ≤ m ≤ 200,000. Each of the following m lines contains a command, either “road A B” or “line C”, where 0 ≤ A ≠B < n and C (0 < C < 1,000,000) is a real number of which the fractional part is always 0.5. There exists at most one road construction connecting a pair of cities and there exists at least one query per a test case.

Your program is to write to standard output. Print exactly one line for a query through all test cases. The line should contain two integers which represent the number of states and the total number of cities of them respectively.