A treasure hunter got a map of an ancient pyramid where the sacred treasure is enshrined. He started on a journey to excavate the treasure. Once he arrived at the gate of the pyramid, the earthquake occurred. As a result, some rocks fell from the ceiling to the floor on the inner pyramid. He found two rocks blocked the way to the treasure. He couldn’t pull any rocks because they are too large and heavy. One thing he could do is to push a single rock moving one block forward. Now, he is going to reach to the treasure and pushing the rocks if necessary. If he will push a rock to a wrong direction, he cannot advance any more, thus he will have to give up the treasure. 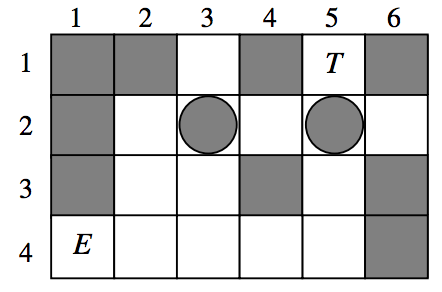 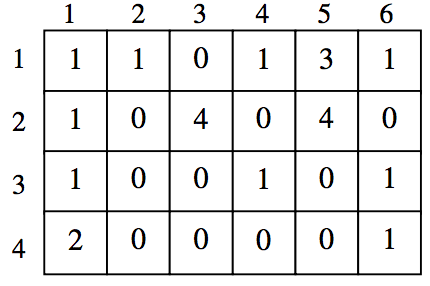 Your program is to read from standard input. The input consists of T test cases. The number of test cases T is given in the first line of the input. Each test case starts with a line containing two integers n and m, the number of rows and the number of columns of a map, 2 ≤ n, m ≤ 50. Each of the following n lines contains m integers of 0, 1, 2, 3, or 4, they represent each row of the map, where 0, 1, 2, 3, and 4 represent an open path, a barrier, the entrance, the treasure, and a rock, respectively. There are exactly a single 2, a single 3, and two 4’s in the map. There is a single space between the integers.

Your program is to write to standard output. Print exactly one line for each test case. Print the minimum number of pushing rocks if they can get to the treasure. Otherwise, print -1.