A plumber has been hired to build an air pipe through a mineshaft from the bottom to the surface. The mineshaft was built without modern technology, so it winds its way up through the earth. Because it is very time consuming to bring the tools necessary to bend the pipe below the surface, the plumber wants to minimize the number of bends in the pipeline.

For example, for the mineshaft in the first picture below, the minimal number of bends in a pipeline from the bottom to the surface is two. Different optimal solutions exist, one of which is shown in the second picture. The bullets indicate the bends in the pipeline.

On the way from the bottom of the mineshaft to the surface, the level (the y-coordinate) increases with every segment of a wall. Hence, the mineshaft does not have horizontal plateaus or ‘ceilings’, and at no point does it go back down again.

Hence, the solution in the third picture above (also having two bends) is not allowed, because the lowest segment of the pipeline can be attached to the walls at only one place: at the bottom of the right wall.

Note that sometimes it may be useful to have the pipeline intersect with itself. For example, in the mineshaft below, this is needed to get from the bottom to the top of the mineshaft with only three bends. 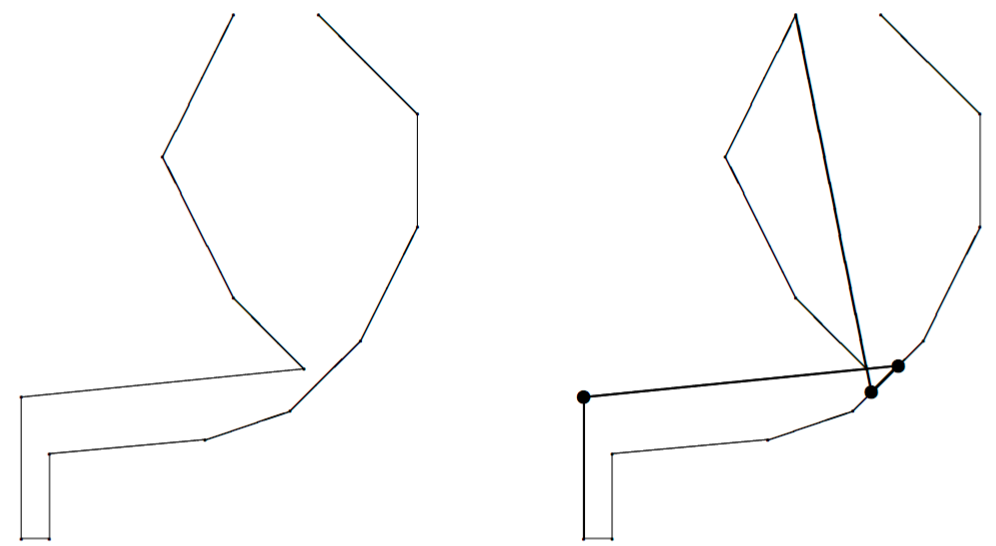 For every test case in the input file, the output should contain a single number, on a single line: the minimum number of bends in the pipeline to make it from the bottom of the mineshaft to the top, under the conditions from the problem description.

These testcases correspond to the pictures in the problem description.