Holy Hand Grenades have found multiple uses throughout history. Most notably, King Arthur did use a Holy Hand Grenade (HHG) to dispatch a vicious rabbit which was guarding the entrance to a cave. The instructions for its use are in the Book of Armaments (Chapter 2, verses 9-21), and are read as follows: 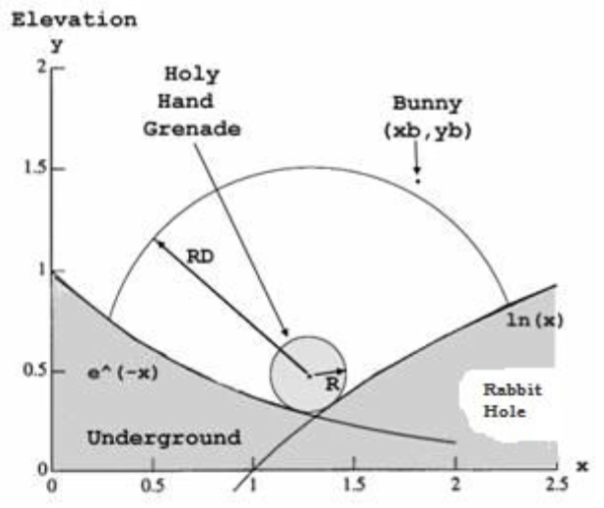 Unfortunately, the Book of Armaments faileth to mention that the HHG must come to a complete stop (i.e. rest stably) before it can explodeth and blow a rabbit to tiny bits. As long as it rolleth or wobbeleth, it refuseth to explodeth. Unknown is the reason why the authors of the Book of Armaments neglected to mention this pertinent fact. Further complicating matters, different HHGs have different radii of destruction (RD). Once a HHG resteth stably, and explodeth, everything within or equal to its RD shalt be snuffed out. Presumably, this is what happened to the rabbit with big, pointy teeth; however, there remaineth some controversy over this matter. Because of this controversy, the king hath decreed a simulation to be run that may possibly answer this question.