Irvanistan and Jikjikestan are two neighboring countries that have fought several wars with many casualties over their border dispute. Despite the loss of lives in the scale of tens of thousands, none of their border claims have been accepted by the other party.

Recently, the logical leaders who have gained control of both countries have accepted the United Nations proposal to resolve their border dispute. The proposal is to come up with a shorter and simplified version of the border that is calculated by a fair computer program.

The UN suggests to create a new border C with points c0, c1, … , cK, in such a way that c0 = p0 and cK = pN and the following constraints are satisfied. 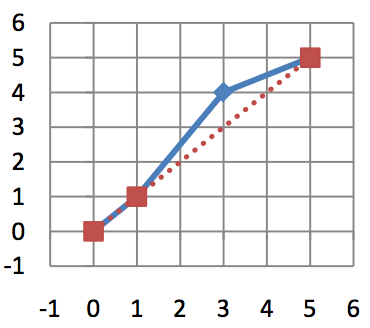 Your task is to find a new border C with the shortest possible length, while adhering to the above constraints.

For each test case write a single line containing the shortest possible length of the new border with exactly two digits after the decimal point.