The Rubik’s Cube was invented by Enro Rubik in 1974. It is a 3-dimensional puzzle made up of 26 smaller cubes. Each smaller cube has from one to three sides exposed for a total of 54 exposed sides. Each of these sides is assigned one of six colors, and each color is assigned to precisely nine exposed sides. The cube is manipulated by rotating any side of the cube by 90 degrees. It is considered solved when each side of the Rubik’s Cube is entirely covered by one of the six colors.

You are a researcher at the Rubik’s University and are working on an algorithm to solve a Rubik’s Cube in the least possible number of moves from any starting position. To aid in your research, you need a program that will read in various Rubik’s Cube configurations, perform operations on those configurations, and determine if the resulting cube is solved.

Input to this problem will consist of a starting configuration for the Rubik’s Cube and then one or more operations to perform on the cube.

Which follows this layout: 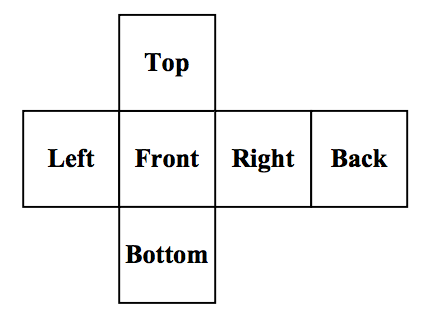 Following the initial configuration will be 1 more operations to perform on the cube. There are 12 possible operations that can be performed, each being a 90 degree rotation of one of the cube’s ‘faces’ of 9 smaller cubes. Note that this results in the movement of 20 colored squares (8 on the face being rotated and 12 on the sides of the smaller cubes that make up that face). All 12 possible operations are listed in the table below with a description of how to perform that operation.

Input to this problem will consist of a (non-empty) series of up to 100 data sets. Each data set will be formatted according to the following description, and there will be no blank lines separating data sets.

There will be one or more data sets. A single data set has 2 components:

Following the final data set will be a single line, “ENDOFINPUT”.