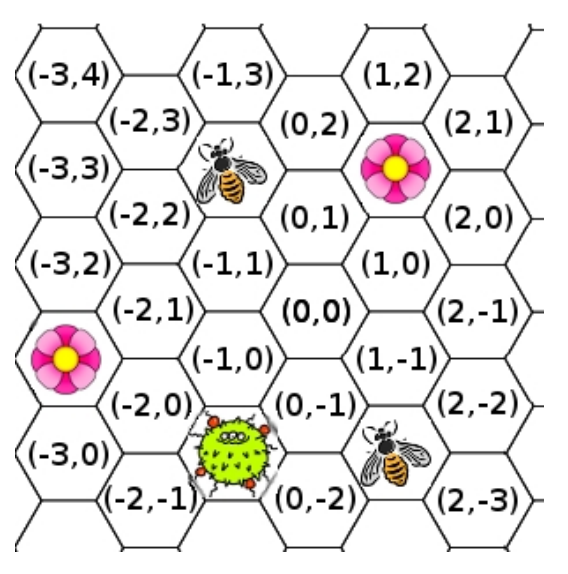 In the last couple of months the wretched bee flu has been on the rampage. To battle extinction, the bees of Inner Dreaded Illnessia have set up a system of safe zones in their hives. Sadly, they can’t create such zones everywhere (they need somewhere to place the honey as well), so there is always chaos when the bacteria appear in the hive. You need to help the bees, and figure out how many of them can be saved if they organize themselves optimally.

The beehive is a hexagonal grid (see illustration), and a bee can move from the zone where it’s located to any neighboring one once every second or it can choose to remain in the same cell (clarification). At the same time, the bacteria will spread from every cell containing it to all its six neighbors once every two seconds. Safe zones stay in the same location (of course). If a bee reaches an empty safe zone before the bacteria does, it can withstand infection by staying there until the danger passes. Due to the functioning of these things, only one bee can stay safe at each of these zones at the same time.

For each test case, output one line containing a single number, the maximum amount of bees that can survive the epidemic.