The small city where you live plans to introduce a new social security number (SSN) system. Each citizen will be identified by a five-digit SSN. Its first four digits indicate the basic ID number (0000–9999) and the last one digit is a check digit for detecting errors. 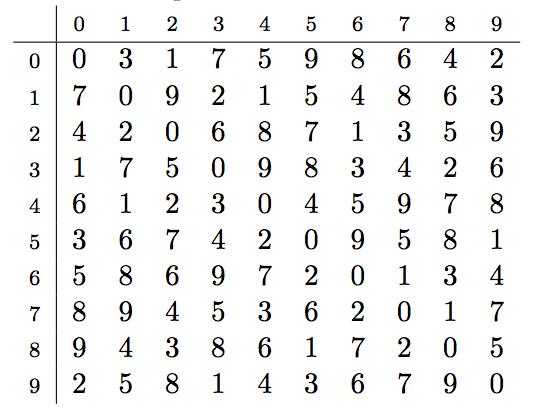 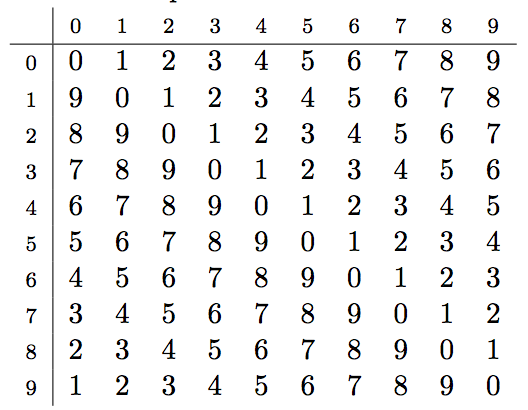 Using an operation table, the check digit e for a four-digit basic ID number abcd is computed by using the following formula. Here, i ⊗ j denotes the table element at row i and column j.

For example, by using Operation Table 1 the check digit e for a basic ID number abcd = 2016 is computed in the following way.

Note that the check digit depends on the operation table used. With Operation Table 2, we have e = 3 for the same basic ID number 2016, and the whole SSN will be 20163.

The city authority wants to detect two kinds of common human errors on digit sequences: altering one single digit and transposing two adjacent digits, as shown in Figure B.1.

Given an operation table, decide how good it is by counting the number of basic ID numbers for which the given table cannot detect one or more common errors.

The input consists of a single test case of the following format.

The input describes an operation table with xij being the decimal digit at row i and column j. Each line corresponds to a row of the table, in which elements are separated by a single space. The diagonal elements xii (i = 0, . . . , 9) are always 0.

Output the number of basic ID numbers for which the given table cannot detect one or more common human errors.