In this problem, you are required to write a program that enumerates all chord names for given tones.

We suppose an ordinary scale that consists of the following 12 tones:

A chord consists of two or more different tones, and is called by its chord name. A chord may be represented by multiple chord names, but each chord name represents exactly one set of tones.

In general, a chord is represented by a basic chord pattern (base chord) and additional tones (tension) as needed. In this problem, we consider five basic patterns as listed below, and up to one additional tone. 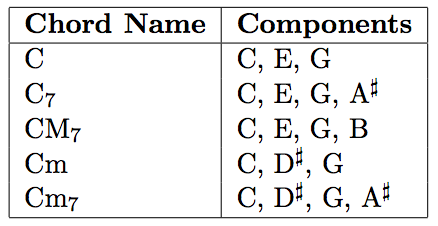 Figure 2: Base chords (only shown those built on C)

The chords listed above are built on the tone C, and thus their names begin with C. The tone that a chord is built on (the tone C for these chords) is called the root of the chord.

A chord specifies its root by an absolute tone, and its other components by tones relative to its root. Thus we can obtain another chord by shifting all components of a chord. For example, the chord name D represents a chord consisting of the tones D, F] and A, which are the shifted-up tones of C, E and G (which are components of the chord C) by two half steps.

An additional tone, a tension, is represented by a number that may be preceding a plus or minus sign, and designated parentheses after the basic pattern. The figure below denotes which number is used to indicate each tone.

The numbers that specify tensions denote relative tones to the roots of chords like the components of the chords. Thus change of the root also changes the tones specified by the number, as illustrated below.

+5 and −5 are the special tensions. They do not indicate to add another tone to the chords, but to sharp (shift half-step up) or flat (shift half-step down) the fifth tone (the tone seven half steps higher than the root). Therefore, for example, C(+5) represents a chord that consists of C, E and G# , not C, E, G and G# .

Figure 5 describes the syntax of chords in Backus-Naur Form.

Figure 5: Syntax of chords in BNF

The first line of input contains an integer N, which indicates the number of test cases.

Each line after that contains one test case. A test case consists of an integer m (3 ≤ m ≤ 5) followed by m tones. There is exactly one space character between each tones. The same tone does not appear more than once in one test case.

Tones are given as described above.

Your program should output one line for each test case.

No chord name should be output more than once. Chord names must be separated by exactly one space character. No extra space is allowed.

If no chord name matches the set of tones, your program should just print ‘UNKNOWN’ (note that this word must be written in capital letters).