Uncle Oliver is going to sell a significant part of his famous dwarf plum tree orchard. He is going to divide the orchard into two parts, sell the first one and keep the other one.

The trees were originally planted in regular rows and columns forming a rectangular grid with the same number of rows and columns. As years went by, Oliver removed many trees which were weak or plagued by bugs so nowadays there is also a lot of free squares unoccupied by any tree.

Oliver has decided that he will keep exactly half of all the trees in the orchard. Moreover, he has few additional demands which, in his opinion, will ensure easy maintenance of his part in the future.

Originally, each tree was planted in the center of an imaginary square whose area was exactly one square meter. Thus, the position of each tree can be described by the coordinates of the square on which it is standing. The dividing fence between the two parts of the orchard will run along the borders of the squares. 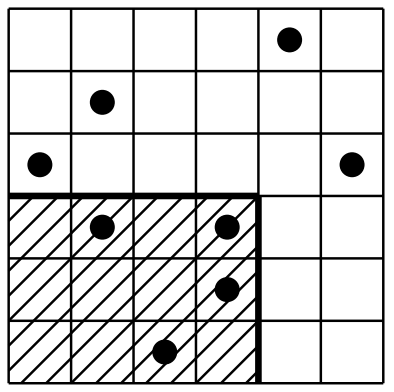 For each test case, print a single line with one whole number A denoting the minimum possible area in square meters of uncle Oliver’s part of the orchard. If it is not possible to divide the orchard according to Oliver’s demands print “-1”. Note that the output value might not fit into 32-bit integer type.