Freddy the Flatland Photographer wants to report on fun new things in Flatland for the Flatland Financial Times. He saw a really nice picture of a Fidget Spinner in Flatland Weekly, and he would like to publish a similar picture. Actually, he likes the picture so much he would like to use the exact same picture. Flatland copyright law forbits Freddy from copying the picture, so he decides to take an originalTM picture that looks the same. Can you help Freddy position his camera? 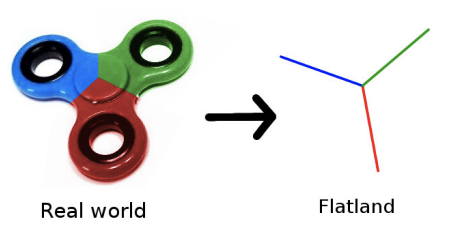 Freddy has one really fancy 1MP camera, but also some cheaper cameras with a smaller number of pixels. Each pixel records three floating point numbers between 0 and 1, (R, G, B), representing a colour. In the picture that he wants to reproduce, the Fidget Spinner is photographed on a (0, 0, 0) black background. At most 40% of the picture is fully black. The Fidget spinner is not “cut off”; the leftmost and rightmost pixel are always fully black. The arms of the Fidget Spinner have really pure colours; in counter clockwise order, they are (1, 0, 0) red, (0, 1, 0) green and (0, 0, 1) blue. The arms are length one each, and all separated by equal angles (2π/3 = 120◦ ). The Fidget Spinner is located at the Origin Photography Studio, with its middle at coordinates x = 0, y = 0, and the tip of its blue arm at x = −1, y = 0.

A flatland camera setup and the resulting picture

Print space separated numbers x, y, and 0 ≤ α < 2π: a position and rotation (in radians) of the camera that would (nearly) reproduce the input picture.