The number of the players is greater than 1 and less than 10. 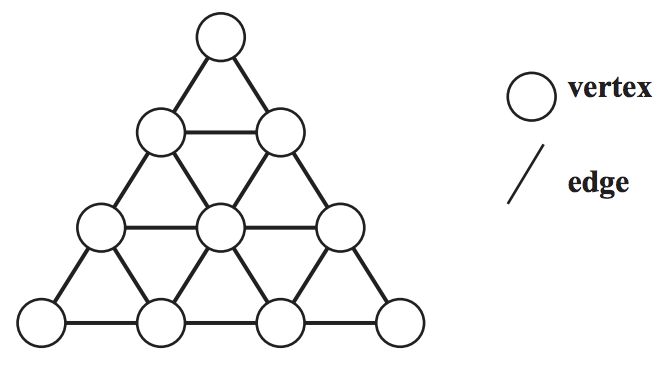 Each player puts his stone in turn on one of the "empty" vertices. An "empty vertex" is a vertex that has no stone on it.

The conditions for removing stones are as follows: 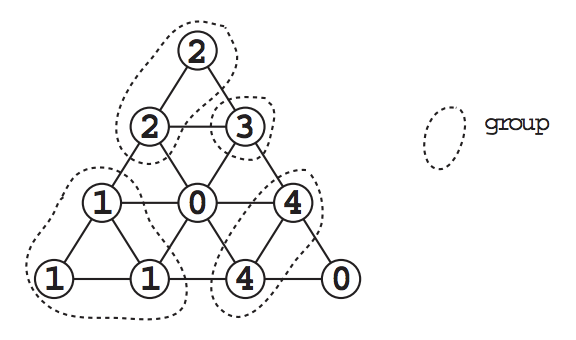 Figure 2: The groups of stones

Figure 2 shows an example of the groups of stones.

Suppose that the turn of the player '4' comes now. If he puts his stone on the vertex shown in Figure 3a, the conditions will be satisfied to remove some groups of stones (shadowed in Figure 3b). The player gains 6 points, because the 6 stones of others are removed from the board (See Figure 3c).

As another example, suppose that the turn of the player '2' comes in Figure 2. If the player puts his stone on the vertex shown in Figure 4a, the conditions will be satisfied to remove some groups of stones (shadowed in Figgue 4b). The player gains 4 points, because the 4 stones of others are removed. But, at the same time, he loses 3 points, because his 3 stones are removed. As the result, the player's points of this turn is 4 - 3 = 1 (See Figure 4c).

When each player puts all of his stones on the board, the game is over. The total score of a player is the summation of the points of all of his turns.

Your job is to write a program that tells you the maximum points a player can get (i.e., the points he gains - the points he loses) in his current turn.

The input consists of multiple data. Each data represents the state of the board of the game still in progress.

The format of each data is as follows.

C is the identification number ofthe player whose turn comes now (1 ≤ C ≤ 9) . That is, your program must calculate his points in this turn.

For each data, the maximum points the player can get in the turn should be output, each in a separate line.