Einbahnstraße (German for a one-way street) is a street on which vehicles should only move in one direction. One reason for having one-way streets is to facilitate a smoother flow of traffic through crowded areas. This is useful in city centers, especially old cities like Cairo and Damascus. Careful planning guarantees that you can get to any location starting from any point. Nevertheless, drivers must carefully plan their route in order to avoid prolonging their trip due to one-way streets. Experienced drivers know that there are multiple paths to travel between any two locations. Not only that, there might be multiple roads between the same two locations. Knowing the shortest way between any two locations is a must! This is even more important when driving vehicles that are hard to maneuver (garbage trucks, towing trucks, etc.)

Your program will be tested on one or more test cases. The first line of each test case specifies three numbers (N, C, and R) separated by one or more spaces. The city has N locations with distinct names, including the company’s garage. C is the number of broken cars. R is the number of roads in the city. Note that 0 < N < 100, 0 ≤ C < 1000, and R < 10000. The second line is made of C + 1 words, the first being the location of the company’s garage, and the rest being the locations of the broken cars. A location is a word made of 10 letters or less. Letter case is significant. After the second line, there will be exactly R lines, each describing a road. A road is described using one of these three formats:

For each test case, print the total distance traveled using the following format:

Where k is test case number (starting at 1,) ␣ is a space, and V is the result. 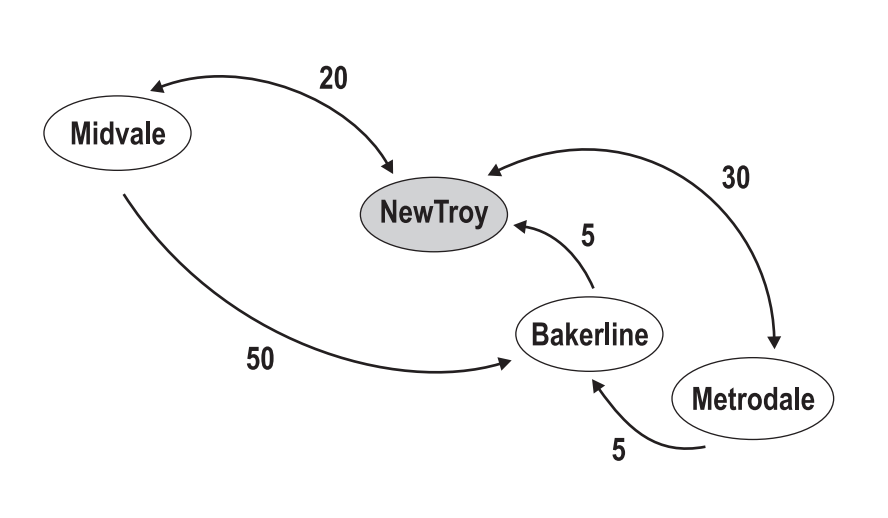