After winning a great battle, King Jaguar wants to build a pyramid that will serve both as a monument to remember his victory and as a tomb for the brave soldiers that died in battle. The pyramid will be built in the battlefield and will have a rectangular base of a columns by b rows. Inside it, at ground level, is a smaller, rectangular chamber of c columns by d rows that will contain the corpses and weapons of the fallen soldiers.

The King’s architects have surveyed the battlefield as an m columns by n rows grid and have measured the elevation of each square as an integer. 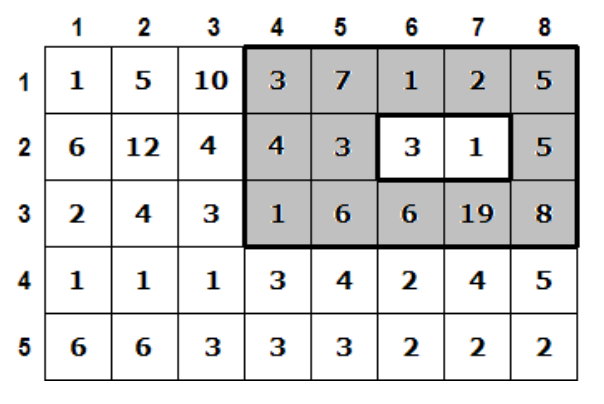 Help the architects pick the best place to locate the pyramid and the internal chamber so that the final elevation of the base is the maximum possible for the sizes given.

LINE 1: Must contain 2 space-separated integers that represent the upper-left corner of the base of the pyramid, the first number being the column and the second the row.

LINE 2: Must contain 2 space-separated integers that represent the upper-left corner of the chamber inside the pyramid, the first number being the column and the second the row.

NOTE: If there are multiple optimal placements, then any one of them you output will be considered correct.