Petanque, a game which uses balls (some boules and one coche), was developed in the small town of La Ciotat, near Marseilles, France. The aim of the game is simple. If playing football is kicking a ball into the opposite goal and keeping it out of your own, playing petanque is placing your boules nearer to the coche and keeping your opponent’s boules away.

You are invited to simulate some games of Petanque. For simulation purposes, we will consider that the playing floor is a plane and the balls are adimensional (they can be considered as points). You will be given the names of the two players. The first player given will be the first to play. For each ball (coche or boules) thrown, you will be given the starting position of the ball, its direction and how many meters it will roll. You may assume that the starting position of the balls are inside the playing floor, the balls will never leave the floor and the starting position of a ball will never coincide with the current position of another ball in the playing floor. The direction of each ball is given in degrees where the east direction (x-positive) corresponds to zero degrees and the degrees increase in the counter-clockwise direction, as shown in the figure below. When a ball that was thrown knocks another ball in its way, the 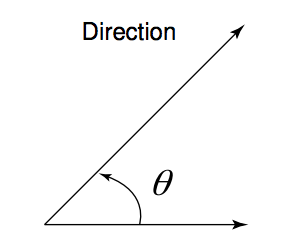 thrown ball stops. The ball which was still starts moving in the same direction for an amount of meters equal to the quantity of meters that the thrown ball would still roll if there was no ball in its way (this amount will NEVER be zero meters). If this ball encounters another one, the procedure is repeated (here again the amount of meters still to roll will never be zero).

The input consists of several test cases. The first line in the input contains an integer N specifying the number of test cases (1 ≤ N ≤ 10000). The first line of a test case contains the name of the two players separated by one space. A player name is composed of at most 20 letters from the English alphabet (from ‘A’ through ‘Z’ and ‘a’ through ‘z’). The next seven lines describe the seven balls in the order they are thrown in the game (first the coche and then the boules thrown by the players according to the rules above). Each line contains four integers X, Y , θ and D representing respectively the starting position of a ball (-1000 ≤ X, Y ≤ 1000), its direction (0 ≤ θ ≤ 360) and the distance (0 < D ≤ 100) it will roll if it does not encounter any other ball in its way.

For each test case in the input, your program must produce one line containing the name of the player who won the game and how many points she/he scored separated by a single space.