For example on the following graph representing the working area of a salesman, 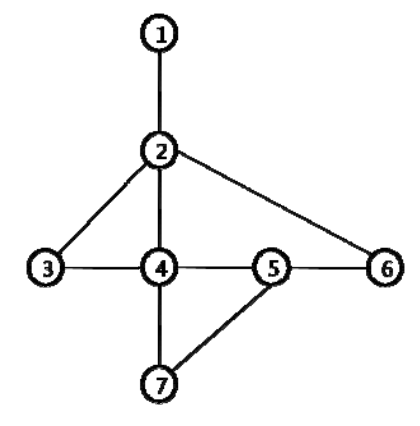 Given a graph representing the working area of a salesman and a working path (possible not a correct path), A, of a salesman, write a program to compute a correct working path, B, of the same length where the distance dist(A, B) is minimized.

The input consists of T test cases. The number of test cases (T) is given in the first line of the input. The first line of each test case contains two integers n1, n2 (3 ≤ n1 ≤ 100, 2 ≤ n2 ≤ 4, 950) where n1 is the number of vertices of the graph representing the working map of a salesman and n2 is the number of edges in the graph. The input graph is a connected graph. Each vertex of the graph is numbered from 1 to n1. In the following n2 lines, each line contains a pair of vertices which represent an edge of the graph. The last line of each test case contains information on a working path of the salesman. The first integer n (2 ≤ n ≤ 200) in the line is the length of the path and the following n integers represent the sequence of vertices in the working path.

Print one line for each test case. The line should contain the minimum distance of the input path to a correct path of the same length.